The Saga of the Forgotten Salt 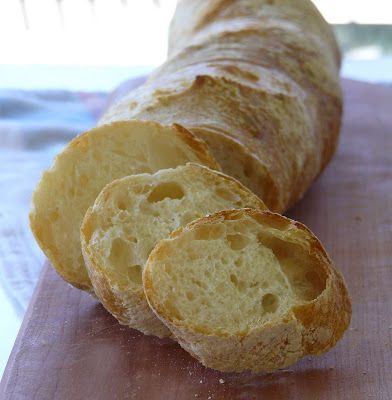 I was multi tasking yesterday morning. I had an appointment to get my hair cut and I also wanted to bake bread. I put a double batch of French bread on to knead in the Magic Mill. A little more than 8 cups of flour. I was trying to time it so that I could leave the dough to rise while I was out. Unfortunately, the hair dresser was running late and by the time I got home the bread had more than tripled and was coming out the top of an 8 litre container. Not a big deal, I just punched it down and put it aside for the second rise.

Before I went out I had also been playing telephone tag with a computer technician trying to get an external monitor working on our laptop. The laptop monitor had died. Called him again while the dough was rising. He finally suggested that I bring it in and he would set it up for me. So I put the bread, in the middle of its second rise, back in the fridge and headed into town. I was gone about an hour. When I got back I took the bread out of the fridge and again set it aside on the counter for it to warm up and finish rising. When it was ready, I dumped it out on to the board, divided it in half and put half back into the container and in to the fridge. The plan was to bake the second batch today. Just as I was shaping the loaves I suddenly remembered that I forgot to add the salt. Something I have never done before. Oh well too late now. Baked two baguettes and one larger loaf. The bread was definitely saltless. But it reminded me of a bread my grandmother use to bake for my grandfather. He was on a salt free diet. I loved that bread, buttered and sprinkled with salt. I used one of the baguettes last night and it actually worked well with the chicken liver pate. I sliced the larger loaf this morning to make toast and topped it with tomatoes sprinkled with salt and pepper, so again, the salt in the bread wasn't missed.

Now what to do with the rest of the dough. I've often said that bread is very forgiving. So I thought I would put it to the test. I figured I had nothing to lose. So this morning I took it out of the fridge and dumped it out on the board, punched it down and sprinkled it with salt. Gave it a quick knead and back into the dough pail to rise. Because the dough was still cold it took a while. At first I wondered if it was going to rise. But it did. When it was ready I shaped three baguette style loaves and left them to rise. Of course the 'proof of the pudding is in the eating'. Keeping my fingers crossed I cut into one of the loaves. Oh my. Perfect! Three of the best baguettes I've ever made. Tasted great. Of course a longer cold rise always produces a better bread.

Anyway, my point is that it is really difficult to screw up bread. 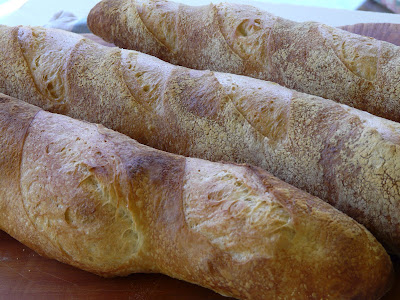 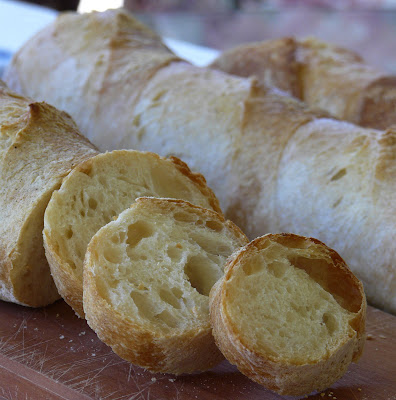 Posted by Thibeault's Table at 4:22 PM