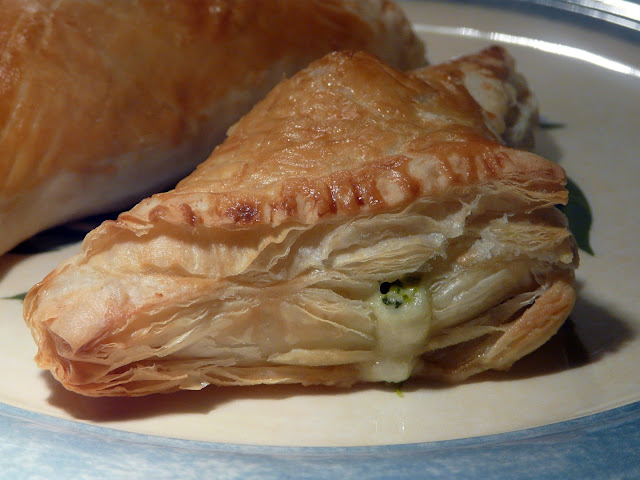 
This was one of our dinners last week.    I called  Moe from work  and asked him to take the puff pastry out of the freezer.  I had plans.  No recipe but a general idea.
I had a double chicken breast that I had presalted with the idea of roasting it , but decided to make Chicken and Broccoli Turnovers instead.
Covered the chicken breast with broth. Added a garlic clove and a sprig of thyme and put the chicken on to simmer.
The broccoli was steamed and set a side and when the chicken was cooked it was also set a side while I made the sauce.
Started with a roux (butter and flour) and used half chicken broth (what the chicken was cooked in) and half cream.  Seasoned with a little minced garlic (used a microplane) fresh thyme, salt, pepper and fresh grated Parmesan cheese. 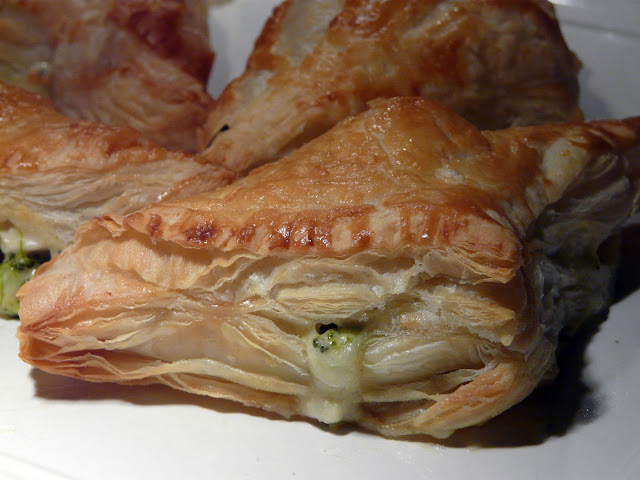 The chicken was removed from the bone and chopped up into small pieces and was added to the sauce along with the broccoli.
Rolled out the puff pastry and cut into squares. Brushed a little beaten egg along the edges and sealed the turnovers using a fork.
Finished off by brushing the turnovers with the beaten egg and into a 400°F oven for about 20 minutes.
The turnovers were baked on a parchment lined baking/cookie sheet.

Posted by Thibeault's Table at 7:23 AM