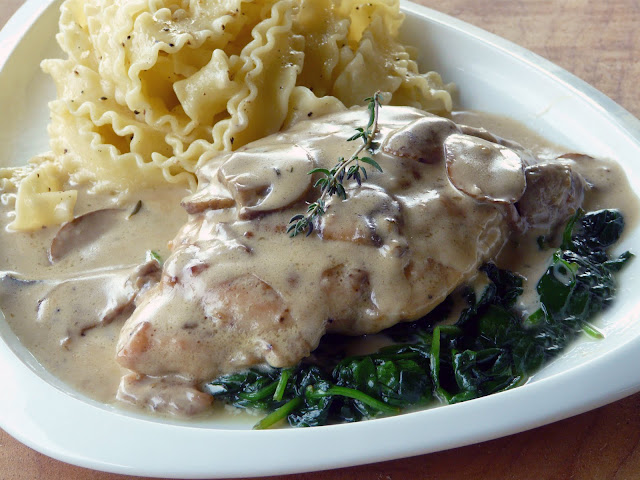 Boneless Chicken Breasts in a mushroom sauce served over spinach with Garlic Buttered Noodles.
Another  one of those simple to put together meals.  Even on a work night.
The chicken breasts were pounded out, not to thin, rubbed with garlic ( NOTE: used a microplane  to make a garlic paste) dipped in seasoned (salt and pepper) flour and sauteed in olive oil and butter.
When the chicken was golden brown, it was removed from the pan.  In the same pan  I sauteed finely chopped shallots and minced garlic for about 30 to 45 seconds, and then added sliced crimini mushrooms.   When the mushrooms were cooked, I sprinkled in  about one tablespoon of flour and cooked for two minutes and then added one cup of chicken broth and one cup of heavy cream.  Seasoned with fresh chopped thyme and simmered for two minutes before adding the chicken back into the sauce.   Cooked another five or six minutes until chicken was fully cooked.
The cooked noodles were tossed with a little butter, a minced garlic clove and lots of black pepper. 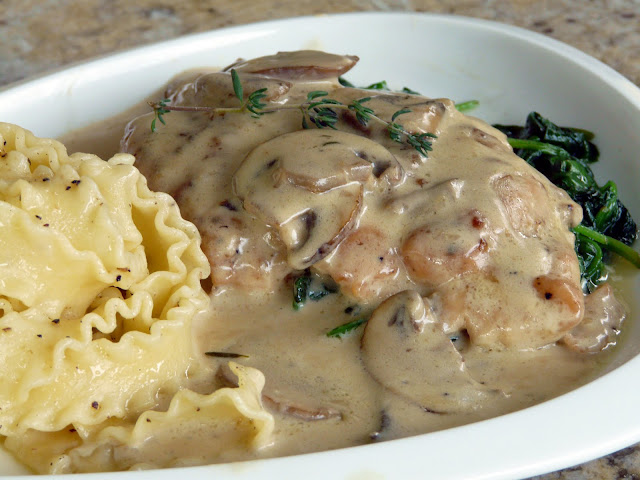 Posted by Thibeault's Table at 7:50 AM