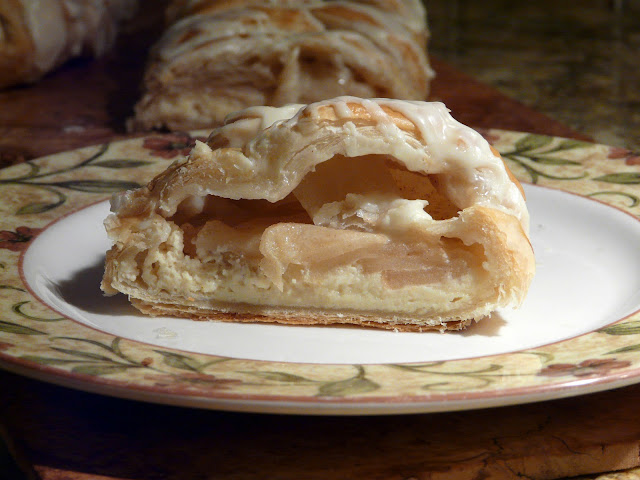 I went looking on line for an apple recipe and found just what I was looking for on
A Cozy Kitchen.
First saw the picture of Adrianna's Apple Cream Cheese Danish on Tastespotting.
Great photos of the Danish as well as a wonderful pictorial on how to braid the dough. 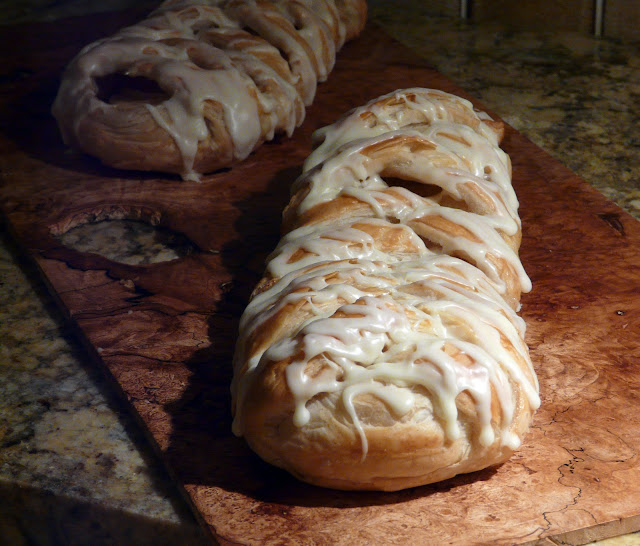 This is a very simple  recipe that makes two medium size Danish.
Moe called it  "elegant".
While the Danish was still warm, Moe took a couple of slices over to our neighbours so they could enjoy it too. 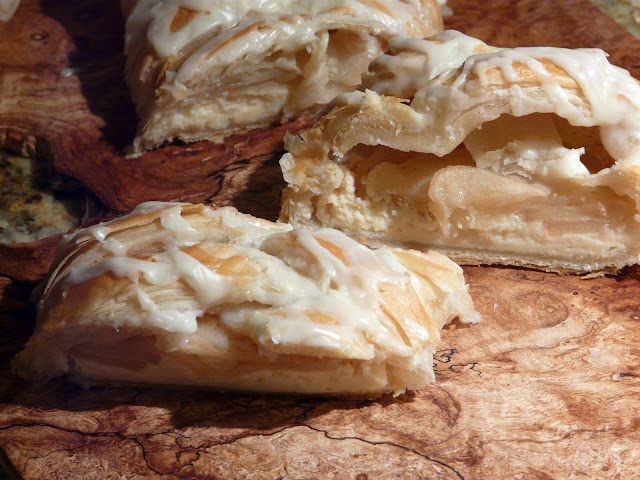 Like most recipes I made a few adjustments to suit my taste, omitting ricotta in the filling, but adding a small egg.  Omitting the lemon zest but increasing the vanilla. And I added white chocolate to the icing.  My changes are highlighted in red.
Apple Cream Cheese Danish 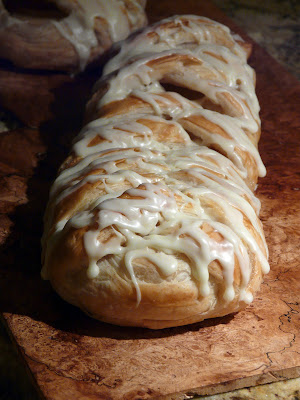 Preheat the oven to 400 degrees F.

In a medium bowl, place the cream cheese, ( ricotta, lemon zest I omitted, ) vanilla, salt, 4 tablespoons of sugar and mix until smooth, using an electric mixer fitted with a paddle attachment. Set aside.

Peel and slice your apples into  1/4-inch slices. (I cut mine 1/8"  so that they would cook in 20 minutes) .In a small bowl toss them with 1 tablespoon of sugar, cinnamon and juice from the one lemon.

At an angle, slice off the top corners and cut two notches in the bottom. Slice 1-inch strips diagonally down both sides of the puff pastry, leaving the center uncut. Try to cut the same amount of strips on both sides. I had about 8 strips per side.  Add three tablespoons of cream cheese filling, spreading it evenly down the center of the puff pastry.
(I divided the cream cheese filling between the two danish. There was way more than 3 tablespoons each) Top with apple slices.

Fold in the bottom and top flaps. Braid the puff pastry, by folding the strips over the filing, alternating sides, until you’ve worked your way down the puff pastry. Using your knife, trim off any leftover strips or extra dough.

Repeat with the second sheet of puff pastry.

Transfer the danish (with parchment) to a baking sheet, and brush top with egg wash. Refrigerate for 15 minutes. Transfer baking sheet to oven and bake for about 20 (closer to 30 minutes) minutes, or until puffed up and golden brown.

While baking, mix confectioner’s sugar with milk and mix. When the danish comes out of the oven, drizzle top with icing and serve warm.

I heated a couple of tablespoons of heavy cream. Added the chopped white chocolate and stirred until smooth. Added enough powdered sugar to make the icing. Added a few more drops of cream. Put the icing in a plastic bag, cut off the tip and drizzled over the Danish while they were still quite warm.
Posted by Thibeault's Table at 6:24 AM