I have such an appreciative husband.

He loves my bread.
So I've recommitted myself to baking at least once if not twice a week.

This batch of dough was started with a Biga.
I fed the Biga twice.
Started it on Monday morning thinking I would make the dough later in the day.
But that didn't happen, so I fed it again before I went to bed. 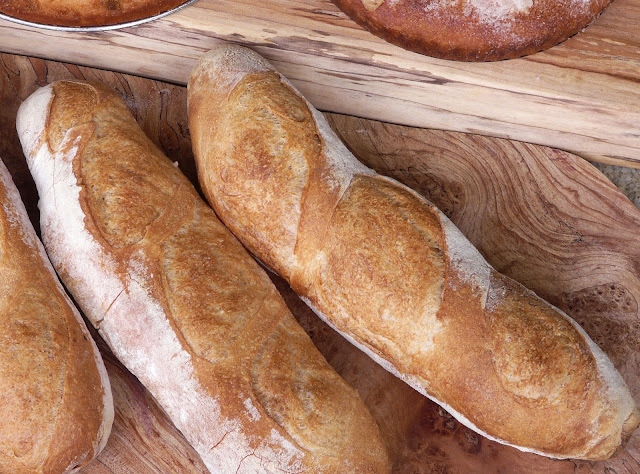 Tuesday morning I kneaded up a double batch of French Bread dough using eight cups of flour and the biga (another 2 1/2 cups). After the first rise, the dough pail went into the fridge.   Even in the fridge the dough rose to the top of the pail and had to be knocked down twice.

After the second time, I divided the dough in half and put into two different pails.

One came out of the fridge at 5:30 this morning and I gave it ample time to come to room temperature and double again. 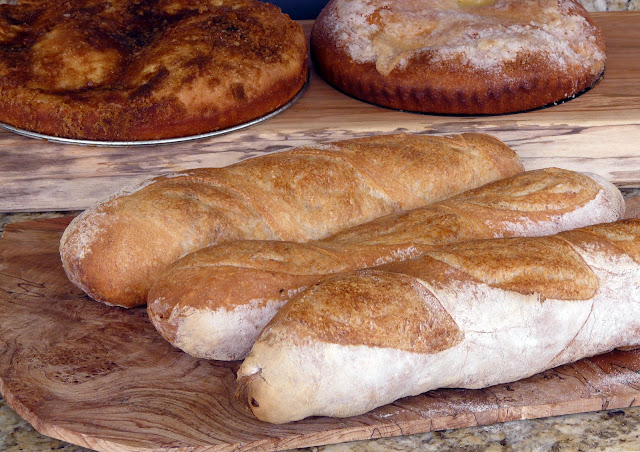 While the three Batons were rising, I mixed up a double batch of  rich, buttery  "Brioche" style dough and made two Tarte au Sucre.

One with a brown sugar topping 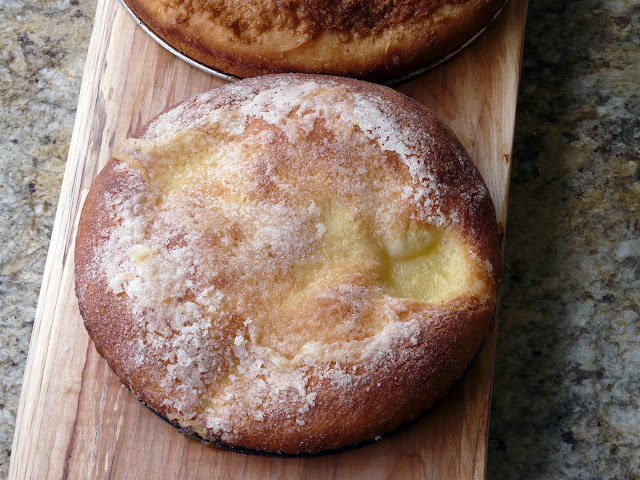 and the other with white sugar. 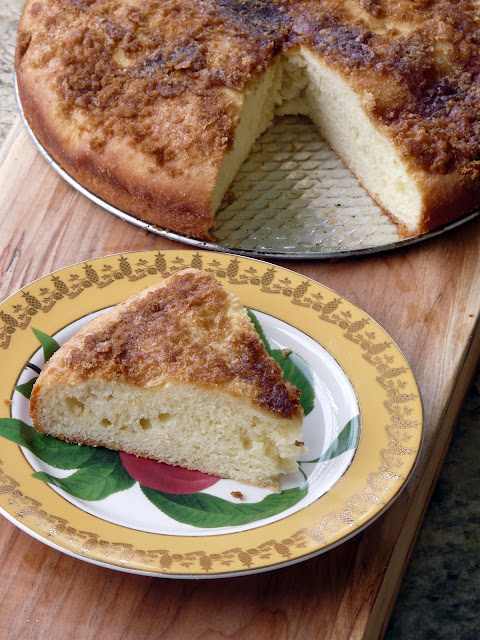 Sugar Yeast Cake
Source:  Anne Willan
This yeast cake with a sugar topping is popular in the North, which is sugar beet country. you can double the quantity of dough and use half for 'pain brioche', a rich bread that the French like to toast for breakfast.


Make the yeast dough. Put the lukewarm milk in a small bowl, add the
sugar and add the yeast.   Leave to proof.  Sift the flour on a marble
slab or board and make a well in the center.  Add the eggs, salt and
dissolved yeast mixture.  Briefly mix the central ingredients then draw
in the flour with both hands, pulling the dough into large crumbs with
the fingertips.  Knead the dough for 5 to 10 minutes or until very
smooth and elastic, adding more flour if necessary so that the dough is
not too sticky.  pound the butter to soften it thoroughly, then work in
into the dough, slapping the dough on the work surface, just until the
butter is thoroughly incorporated.  Transfer the dough to a light oiled
bowl, cover with a damp cloth and let rise until almost doubled in
bulk.  Thoroughly butter the pie pan.

Transfer the risen dough to a floured work surface and fold it in
thirds, patting it to knock out the air.  flour your hands and flatten
the dough into the base, not the sides of the pan.  Let rise for 15
minutes and then spread with soft butter and sprinkle with the brown
sugar.  Let rise for 15 minutes and then bake for 15 or 20 minutes in a
400°F oven.  Serve at room temperature.

Posted by Thibeault's Table at 8:55 PM