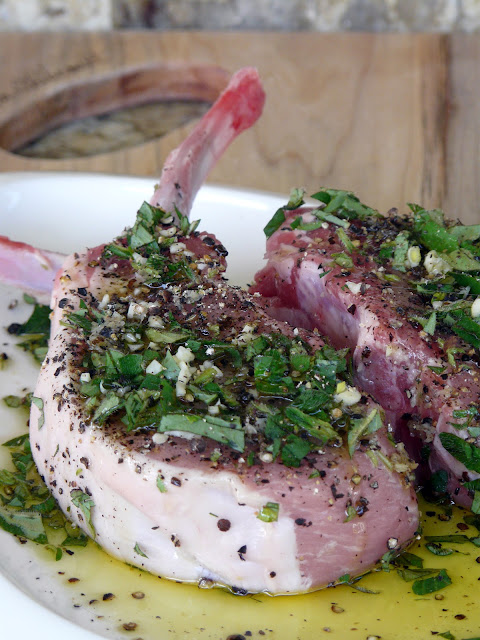 Wednesday Morning Chops were seasoned with garlic, fresh oregano from the garden, lots of coarse ground black pepper and drizzled with olive oil.

One hour before grilling, the juice of one large lemon was squeezed over the chops.

I have a five burner grill.
It is very seldom I need to use all five of the burners.
To cook these chops,
the two outside burners were off and
the three centre burners
were turned
on to medium high and the grill preheated to 600°F.

As soon as the chops went on the grill the burner directly
under the chops was turned down  low
and  the burners on either side were adjusted
to maintain a temperature of 400°F. (lid closed).


Served with Greek Salad
and Roasted Potatoes seasoned with garlic, lemon and oregano.


My twist on a traditional Greek Salad.

A Greek Salad is the easiest of salads to make. It is one of the few salads that I actually like.

Just cut up all the vegetables, sprinkle with oregano, salt, pepper and the feta cheese and drizzle with olive oil. The better the ingredients the better the salad, so if you can, use an imported Feta, preferably a Sheeps Feta, and a good quality Extra Virgin Olive oil. This salad is even better in the summer when local tomatoes are in season.

For something a little different, stack the ingredients


Some of these salads have basil rather than oregano.


or,  drizzle olive oil over a thick slice of feta,

sprinkle with herbs and bake in the oven until the cheese is hot and starting to melt then, place on top of your salad.
Posted by Thibeault's Table at 7:39 AM