Few more of our July meals.

I had a craving for a roast turkey dinner.

Bought a fresh turkey breast.
It was presalted a day in advance and then
uncovered and air-dried in the fridge
before roasting on high heat (500°F) 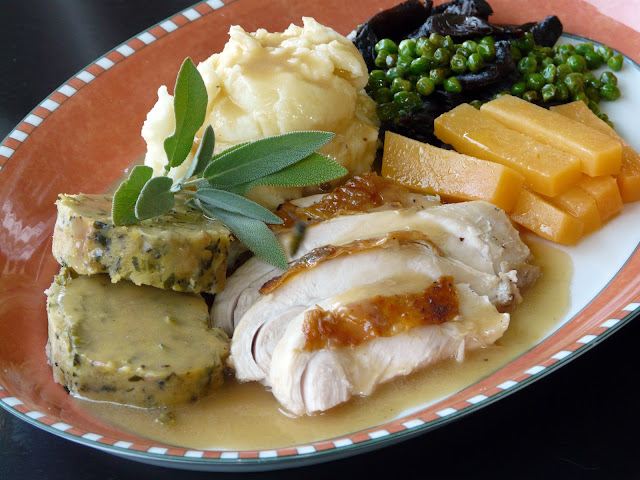 Turkey dinner served with traditional sides and a German Bread Dumpling in place of my regular sage stuffing/dressing.


Many Thanksgivings at my house have proved the high-heat method to
be ideal. A fifteen-pound turkey at room temperature takes two
hours to roast. However, it may take several hours for the turkey
to reach room temperature. While the turkey is sitting out, cover
it loosely with a towel, otherwise the skin will dry out. I prefer
a fifteen-pound turkey as it isn't too heavy for me to handle. It
usually gives lots of good leftovers and is generally available.

There are certain things to think of to ensure success before
beginning: Remove the giblets bag from the interior of the bird.
Remove the wing tips. Put everything except the livers into a pot
and start Basic Fowl Giblets Gravy. By the time the bird is
roasted, the gravy will be done. Use the liver in the
dressing/stuffing or store in the freezer, covered with milk. Make
sure there is a pan big enough for the turkey without it's
touching the sides of the pan. Do not truss.

Consider whether the bird should be stuffed or the stuffing served
as dressing baked separately. If stuffing, think in terms of
twelve cups of stuffing for a 15 pound bird, which will allow the
big cavity to be stuffed and some more stuffing to be crammed
under the skin flap at the neck. I seldom stuff because there are
real food safety questions about the bird and its stuffing sitting
out at room temperature.

The oven must be very clean before roasting, or cooking at this
high temperature will cause unpleasant smoke. In any case, there
will be some smoke, so turn on the fan or open a window. Don't put
the oven rack too high or the skin on the breast will get over
cooked. For a twenty-pound turkey, the rack should be in the
lowest position. Always put the turkey in legs first - dark meat
takes longer to cook and the rear of the oven is the hottest area.

If the top skin seems to be getting too dark, slip a doubled piece
of aluminum foil on top of it. Don't move the turkey. Use an oven
mitt to protect hands and forearms. Remove the foil with the same
oven mitt ten minutes before the turkey comes out.

large turkeys are most easily removed from the pan by holding them
with two pot holders, which will need to be washed. After the
meal, get out a large stockpot to boil up the carcass and leftover
bones for turkey soup and stock.

Rinse the turkey inside and out. Pat dry. Sprinkle the outside
with pepper. If stuffing, stuff cavity and crop, securing
openings with long metal skewers. Lace them. Do not truss.

Put turkey in an 18 X 13 X2 inch roasting pan, breast side up.
Put in oven legs first. Roast until the leg joint near the
backbone wiggles easily, about 2 hours. After 20 minutes, move
the turkey around with a wooden spatula to keep from sticking.
Remove the turkey to a large platter. Let sit 20 minutes before
carving.

Pour off grease from roasting pan and put pan on top of the stove.
Add water or stock. Bring to a boil while scraping bottom of pan
vigorously with a wooden spoon, loosening all the crisp bits in
the bottom of the pan. These add intensity to the gravy. Let
reduce by half. Serve on the side in a sauceboat or add to giblet
gravy.

This is just a basic Outline.

Add eggs. ( I use three to four depending on the amount of bread) Mixture should be moist.

Bring a large pot of salted water to a boil.

Butter a large piece of Cheesecloth (or a clean dish towel or napkin). Pour bread mixture on to cloth and roll, tying at both ends to form a log. Or shape into large round dumpling and twist at top. (Option: Wrap again in plastic wrap)

Place dumpling in water and lower heat to a simmer. Cook for about 50 to 60 minutes.

Remove from water and let cool slightly before unwrapping. Slice and serve with gravy/sauce. 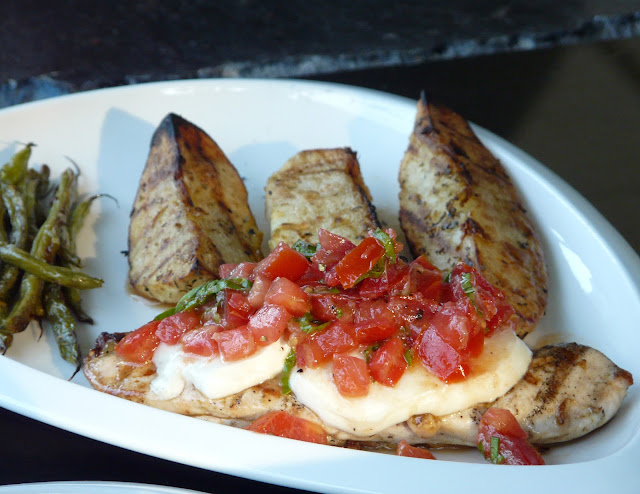 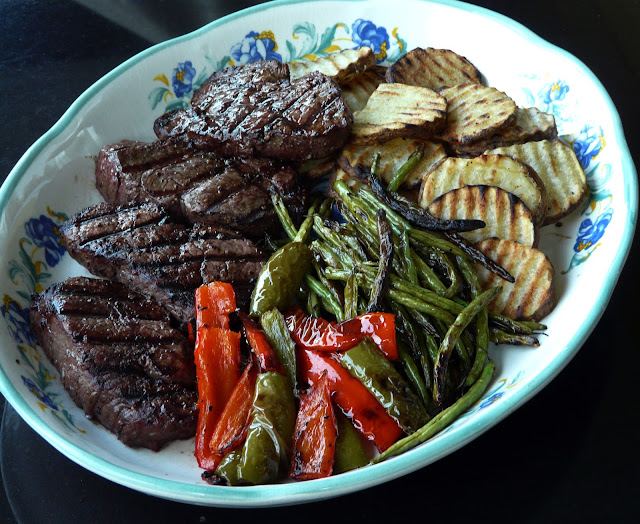 I made this dinner to share with our neighbours Barb and Clif.
Filet Mignon, peppers, green beans and potatoes. 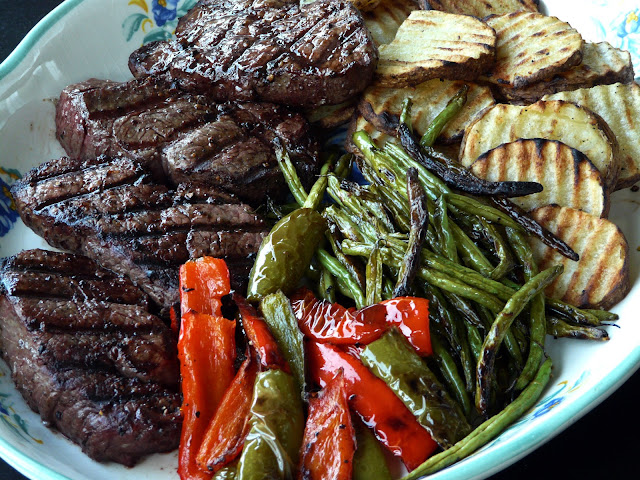 The complete dinner was cooked on the grill. 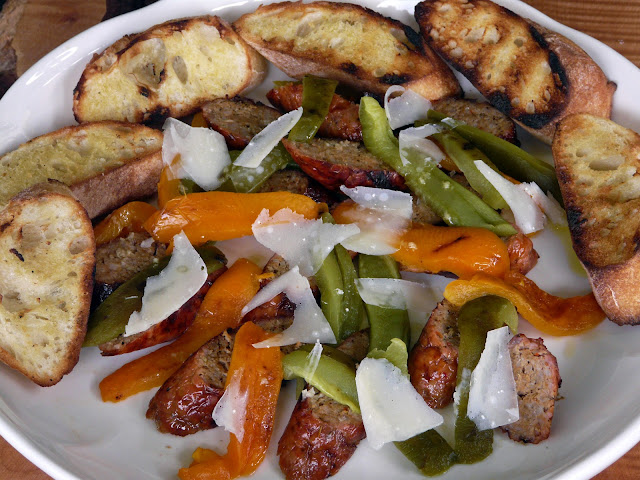 A quick and simple dinner one night.
Grilled Italian sausage and roasted peppers, garlic, a drizzle of olive oil
and shaved Parmesan.

Slices of baguette that were first rubbed with garlic and olive and then grilled. 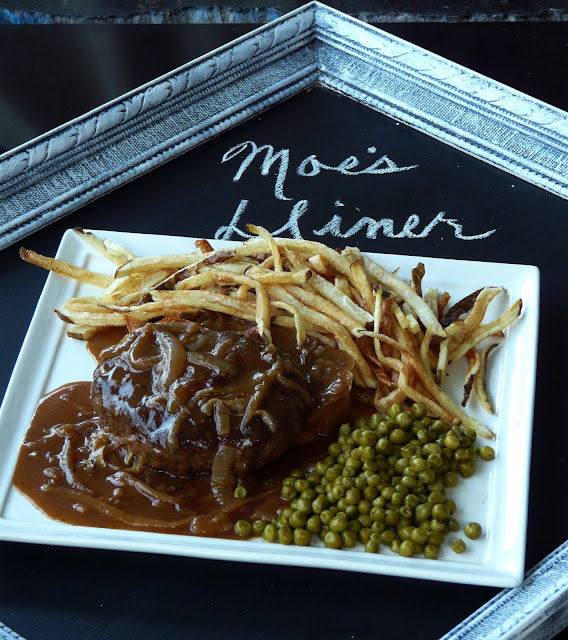 Diner Food
I adapt my Salisbury Steak Recipe for this
Hot Hamburger Sandwich. 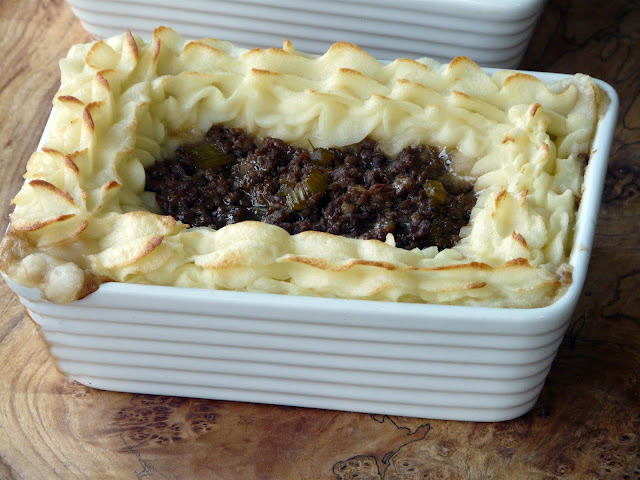 The potatoes were spread on the bottom of the casserole,
topped with ground beef mixture,
Potatoes piped around the edge and baked for
about 20 minutes to brown the potatoes. 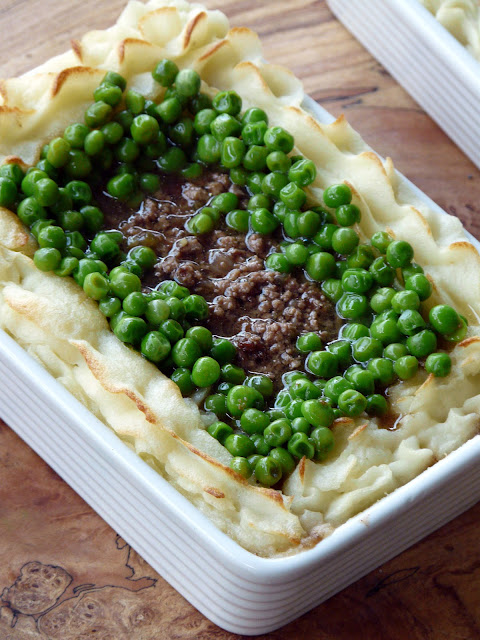 Posted by Thibeault's Table at 5:56 PM