Moe has been recovering from major surgery.
It has been a very stressful month.

Christmas Eve is coming up quickly and it is our tradition to
have Tourtiere for dinner on Christmas Eve.

A friend from the Cooking Forum that I have participated on for about 20 years,
would occasionally send Moe a jar of her homemade Chile Sauce
to have with his Christmas Eve Tourtiere.

He loves Chile Sauce on his Tourtiere.
But he is the only one.
I prefer gravy.

He needed to be spoiled after all he has been through the last month.
So I decided this year that I would use Sharon's recipe
and make Moe a batch of her Chile Sauce.

Other than making Moe a few Jams over the years,that's it. I don't can.

Matt managed our tomato garden this year and we had so many tomatoes
that I froze a number of bags.

Just tossed them in zip lock bags and into the freezer.

I had enough tomatoes to make a half batch of Chile Sauce. 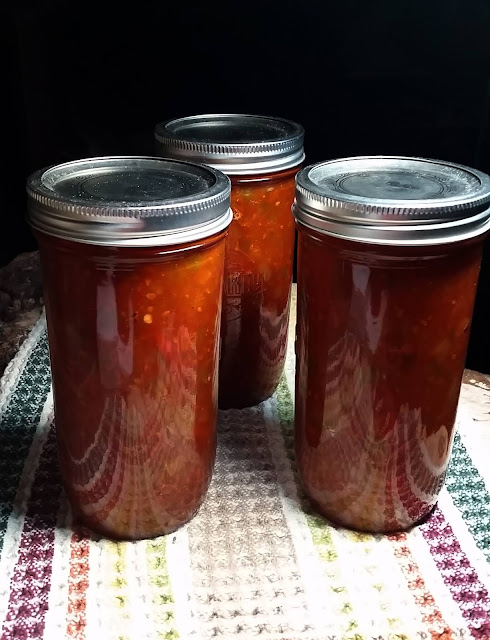 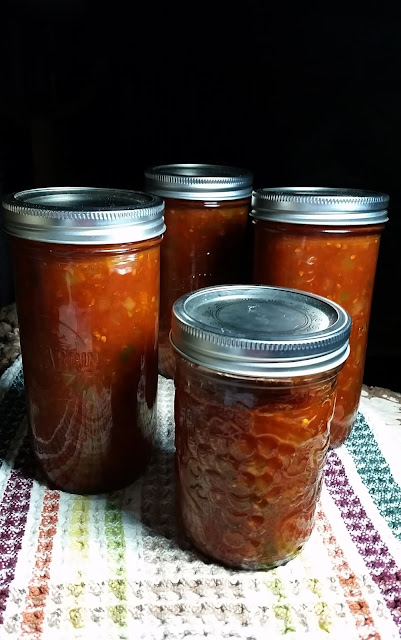 Sharon has been sharing her recipe for years so I know
she won't mind me sharing it here.

I'll offer up this canning recipe because it is something you
don't seem to see in the States. This is NOT to be confused with
Heinz Chili Sauce they are in no may similar.

I got this recipe from a farmer friend's mother over 30 years ago
and I have made it every year since. Same lady that taught me to
make canned tomatoes and dill pickles.

This stuff is great in a meatloaf, along side eggs cooked any way,
topped on a burger or dog, dumped into baked beans, with Tourtiere
or any pork dish. Clive slathers it on freshly baked, buttered,
French bread!

Simmer/low boil chopped veggies with tomatoes for 2 hours then
drain off 2 cups liquid. Add everything else EXCEPT sugar and
simmer another 3 hours or even more, until nice and thick. Add
sugar 1 hour before canning. Fill pint jars and HWB for 15
minutes.

Note: If time is tight I make right up to the add sugar part,
refrigerate overnight and finish the next day.

Posted by Thibeault's Table at 4:33 PM