Once again I neglected my sourdough starter,
and rather than revive it, I tossed it out when I was cleaning out my fridge recently.
If truth be told, as much as I like having my own starter
and being able to bake sourdough bread, I really don't like sourdough bread.
Never have. But Moe and Matthew both love my sour dough.
So Sunday , on my way to work, I made a detour down through Cow Bay
and stopped at True Grain
and bought their Organic stone ground Rye Flour to feed a new starter.

True Grain is an artisan bakery.
Also gave me an excuse to buy one of their cinnamon buns.
So good and NO raisins to pick out.

Mixed up two ounces of rye with four ounces of spring water
and left it covered sitting on the counter. 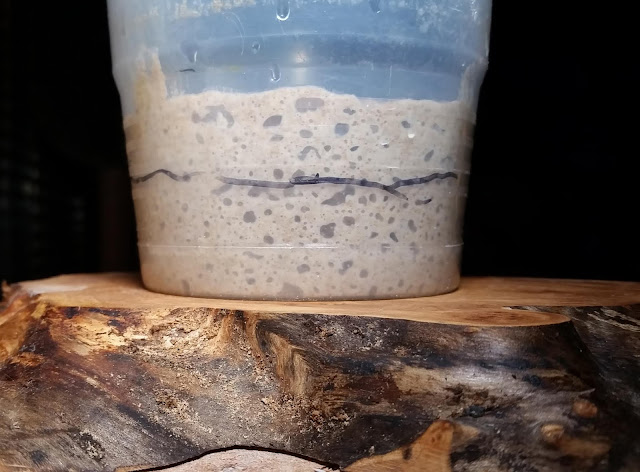 Here is what it looked like Tuesday morning after just 36 hours.

It has doubled and is ready for Stage 2.
I have always been successful using the instructions from
Amy's Bread (author Amy Scherber).

Tuesday Morning
For stage two I fed it with two ounces of organic rye
and two ounces of spring water.
Gave it a good stir and left it on the counter to do its thing.
Moe and I went out for a few hours
and came back to find that it already doubled in just six hours. 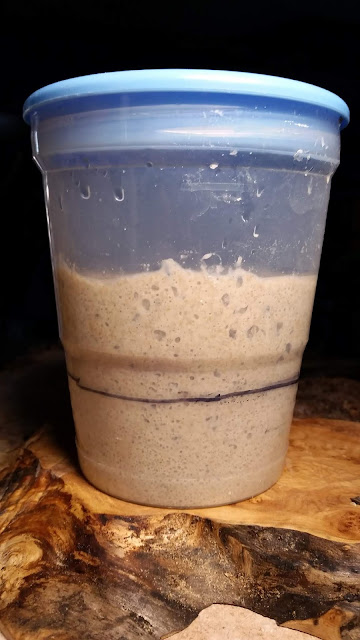 Must be that good Canadian Wheat.

STAGE TWO AND HALF
Tuesday Night

This should have been Stage Three, but
because the starter is doubling so quickly,
I decided to give it an extra feed before
moving on to the final stage. 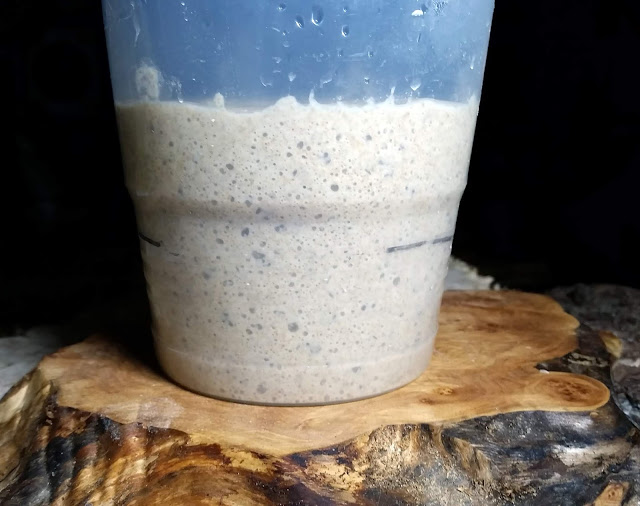 This is what last night's feed
looked like this morning at 4:00 AM

Moving on to Stage Three
the maintenance stage.

Weighed out 6 ounces of Starter and fed it with
3 ounces of rye and 3 ounces of spring water. 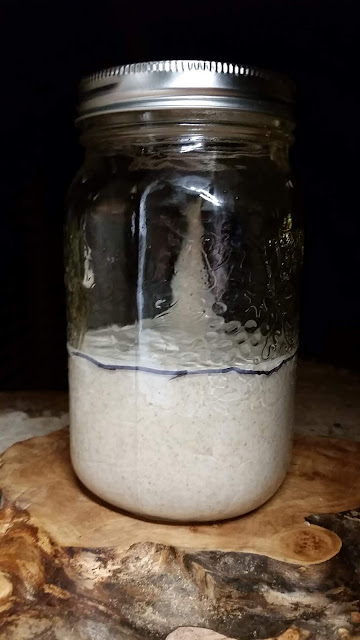 Gave it a good stir and poured into
a Mason Jar. 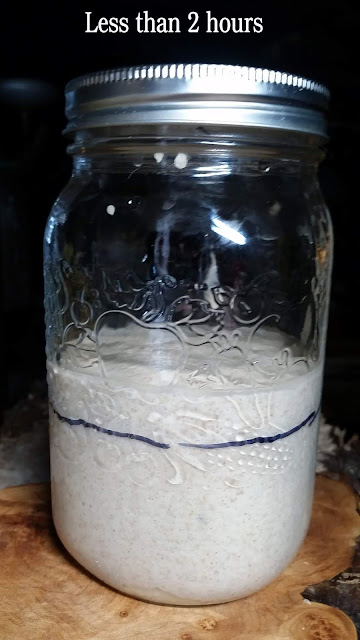 This is what it looked like after
almost two hours.

Once this has doubled it will be ready to use,
and can go into the fridge.

I will pull it out in a couple of days and feed it
again, using the discard in a batch of bread dough. 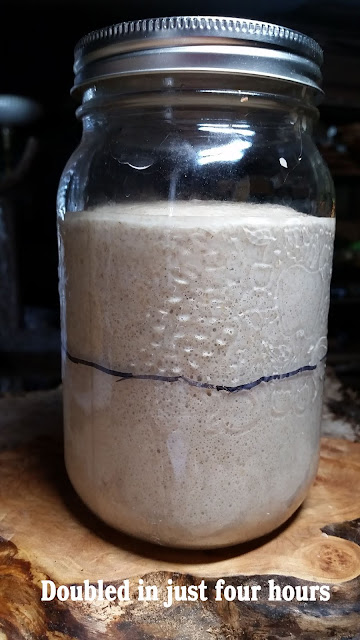 This starter is begun with rye flour because rye just LOVES to
ferment and is an easier starter to get going than a wheat
starter. When I first made it, it had a bubble or two within a
couple hours.

The procedure is to start it with rye flour, then transform it by
changing what you feed it. The original rye will dilute to nothing
over time and you'll end up with a white flour (or whatever other
grain you choose, it could be whole wheat or pumpernickel, or you
could leave it as a rye starter) and water based starter, but it
had the advantage of beginning it's life from highly fermentable
rye flour.

Start it with organic rye flour and spring water. Once you have it
going well you can switch to all-purpose white (or other) flour as
you choose. The use of spring water is recommended for
maintenance, however, as tap water may contain elements (such as
chlorine) which may be detrimental to the health of your starter.
I also recommend that you use a container that you can mark the
volume levels of starter each time, so that you will know when it
has doubled. Use a marking pen or tape or any other means to
indicate on the container the starter levels each time you feed.

Phase 1 - Combine 2 oz organic rye flour (room temp) with 4 oz
spring water in a clear container. The batter should be about the
consistency of very thick pancake batter, add more water or flour
if necessary. Cover & let it sit for 36 - 48 hours at 75 - 77
degrees (a little cooler is okay but over 80 you will incubate the
wrong kind of bacteria and your culture will have an unpleasant
bitter taste). You should start to see tiny bubbles forming after
about 24 hours. By the time it has doubled, there will be a
noticeable network of small bubbles throughout the batter & it
will be foaming & bubbling on top. (If the batter has not doubled
within 48 hours, feed with 2 oz water & 2 oz flour (add more of
either if necessary for the consistency) and let it sit another 24
hours or until you see some definite activity.)

Phase 2 - Stir the culture down, notice how soupy it's become. The
batter should have a noticeable sour smell & a mildly tangy taste
at this point. Add 2 oz water & 2 oz flour and stir vigorously
until well-combined. Let it sit for 12 hours. It should be showing
a fair amount of activity at this point. You should see lots of
foaming & bubbling through the sides as well as on the top. Don't
be concerned if the culture deflates & loses volume. This means
the yeast has exhausted its food supply, but it will continue to
increase in acidity. Don't worry if your culture dramatically active yet.
As long as there is some noticeable activity going on and the mixture
smells & tastes sour, you're on the right track.

Phase 3 - The culture should now have a pronounced, sour, fruity
taste and smell, it should not taste musty or bitter (if it does,
discard and start again, paying close attention to the temp of the
culture at all times). Now you can start "transforming" it into a
white (or other) flour based starter. Use 6 oz of the starter, add
3 oz water & 3 oz flour, stir vigorously. Let it sit for 12 hrs at
75 - 77 degrees F.

Refresh it again, setting up a maintenance level of 12 oz of
starter. This will be your "mother" starter that you use to build
the sourdough starters/sponges needed in individual recipes.
Each time you take part of the mother out to build a starter, you
must refresh it with equal weights of flour and water to bring it
back up to its maintenance level.
To maintain - Use 6 oz of the mother culture (discard the rest),

A strong mother will double in 8-12 hours. If yours doesn't do
that, let it continue to sit out until it has a nice tangy taste
and smell; discard all but 6 oz and repeat this procedure. Repeat
this procedure as many times as necessary until the mother doubles
within 8-12 hrs. It may take several days. Don't get discouraged,

it's worth the effort.