Hand-mixed a 1500g batch of dough on Monday.

After the last stretch and fold the dough was
divided into three containers and refrigerated.

Early Tuesday morning I took one of the containers
out of the fridge and left it on the counter for over two hours.

Baked three baguettes and one little round.

One of the baguettes was too long for the
stone in the CSO so I had to cut a piece off one end.

Reshaped into a small round.

Later in the afternoon, I took a second container
out of the fridge and turned that dough into two
pizzas for dinner. 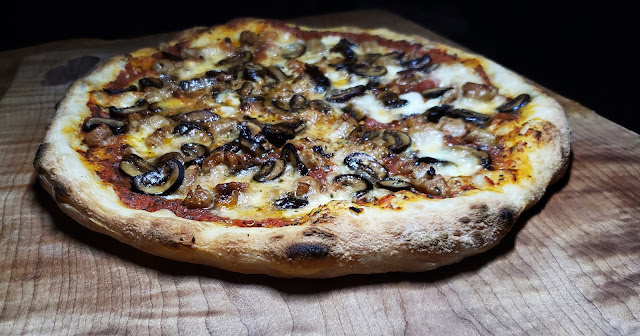 Moe and I shared our usual.

and I made Matt his favourite 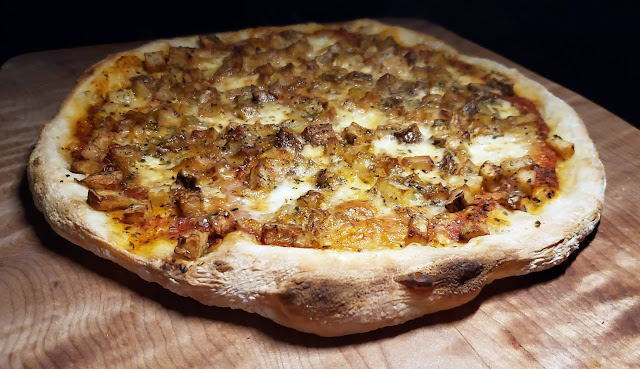 The Greek pizza is topped with fried cubes of potatoes
that are seasoned with fresh garlic , oregano
and a squeeze of fresh lemon juice.

Potatoes can be fried or roasted.

Pizza Sauce
===========
After playing around with many different pizza sauces over the years this is the one that I  settled on as my favourite. It is an uncooked sauce with lots of flavour.

Puree tomatoes with the minced garlic. Grind the fennel seeds. Add the seeds and the oregano, basil, and the olive oil and mix together.

NOTE: I use a stick blender and blend all of these ingredients right in the can.

Posted by Thibeault's Table at 6:38 AM