"Roman Pizza in Teglia or Roman Pan Pizza is a roman cuisine gastronomic product. Once being cooked in the classic baking tray, the product is laid on the pizza by the slice counters or street food counters in order to sell slices of pizza."...Roman Pan Pizza History


Pizza in Teglia was not a term  I was familiar with,
but it reminds me of the pizza that a friend use to make.

A family from Italy moved into our neighbourhood when I was around 14 or 15.
The oldest child  "Anna" and I were the same age.
She had two younger brothers and both parents worked.
It was her job, when she got home from school, to look after her brothers and to get dinner started.
This pizza reminds of the pizza that she would make to serve as the bread
that accompanied their dinner most nights.

It was made in a pan and cut into squares and had very little in the way of toppings.
Mostly a homemade sauce and maybe a little Parmesan.
I don't remember much in the way of other toppings,
except maybe a few slices of their homemade sausage that was preserved in oil.

I loved going to her house because it was so different from mine.
Her house had all these wonderful smells of garlic and herbs
and her father and her uncles had wine fermenting in their basement.
I learned to make my first pizzas from Anna.
No measurements, just adding this much flour to a bowl,
with this much yeast and this much salt and oil
and enough water until it felt right.
(Which is pretty much the way I make bread now.)

Years later , Moe and I use to go to a town just north of Toronto
to have Sunday brunch at an Italian banquette hall.
And they had two or three versions of this pan style pizza on the buffet.
It always reminded me of Anna's.

Now I know it actually has a name.
Early Saturday morning I  started a batch of dough
and after the last stretch and fold it went into the fridge.

Matt took it out of the fridge around 3:00 PM
so that it would be ready to use after
I got in from work.

Baked two and put 1/3rd of the dough in
the fridge and it will get baked later today
or tomorrow. 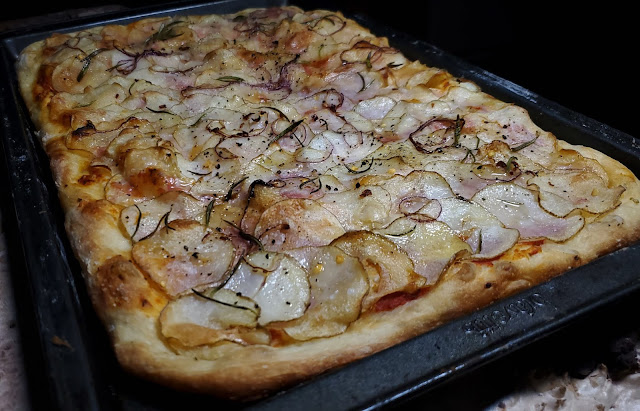 A potato pizza for Matt

The potatoes were layered over
a smear of of pizza sauce and just a small
amount of fresh grated Parmesan and Mozzarella. 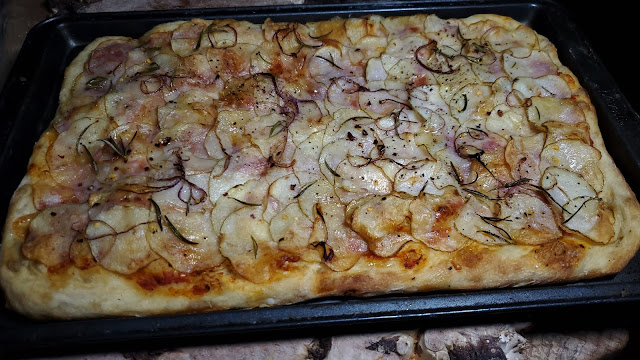 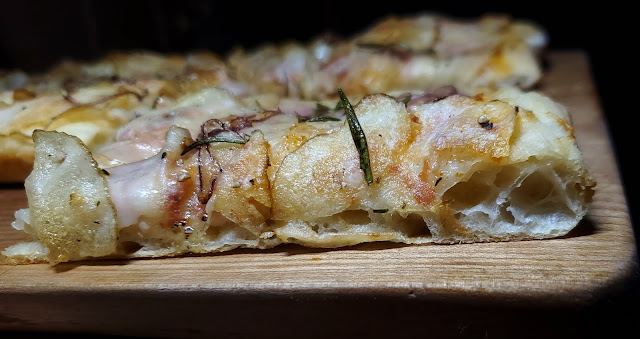 Even though the dough was only given a six hour
fermentation the crumb was still nice and airy. 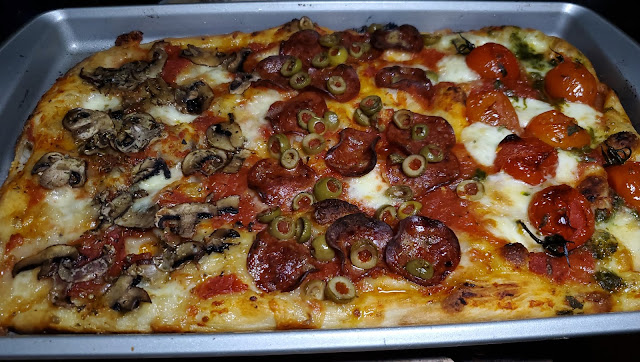 Moe and I shared a three in one Pizza. 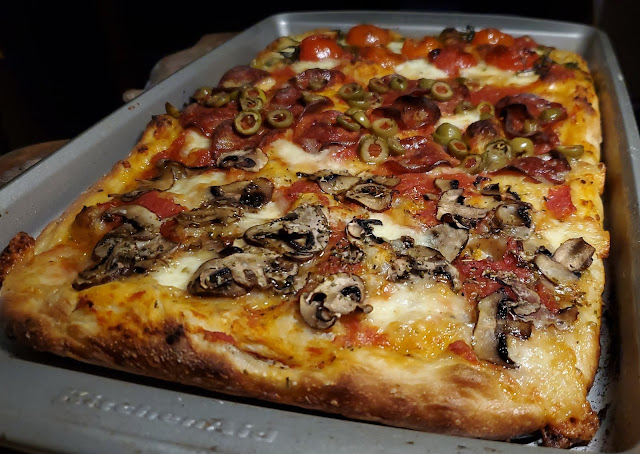 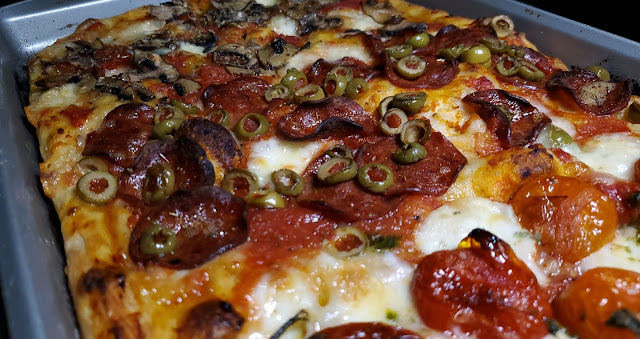 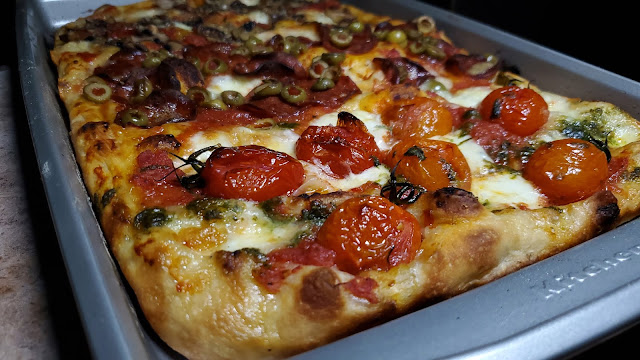 The dough for this recipe wasn't much different than
my regular dough.

The basic difference was a higher hydration (80%),
more yeast and the addition of olive oil.
Same autolyze and stretch and fold method.

(I didn't measure, but about 2 to 3 tablespoons)

Mix flour, water and yeast together and
let rest for 30 minutes.

Add the salt and olive oil.
Do about 6 stretch and folds
20 to 30 minutes apart.
I usually do it over three hours.

If not baking same day, the dough goes into
the fridge immediately after the last stretch and fold
for a longer cold fermentation.

Posted by Thibeault's Table at 7:36 AM